Lapis bistro is an Afghan bistro. Most of the brunch dishes were your typical brunch food with a few Afghan dishes. The music was not ethnic either. The servers were mostly English. Basically, if it was not for a handful of Afghan dishes, this could be a bistro anywhere. 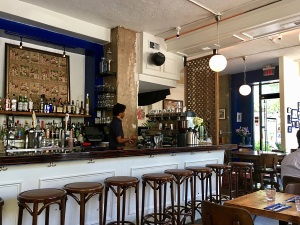 Sambosa Trio
It was supposed to be a philo shell but it was more like a Empanada than a sambosa. There were the spinach, beef and shrimp variety. I think we prefered the spinach over the other two.

Shamee Kebab
I imagined this dish would be something similar to a Persian Kotlet but I was shocked when it was placed in front of us. It looked like **it. I could not believe it, put some effort in presentation. The texture was very crumbly also. Not a good dish. 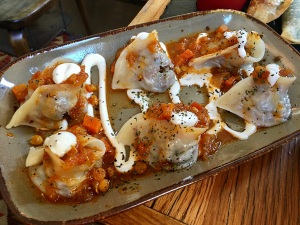 Mantoo Beef
We actually ordered Aushak but were told it was not ready yet so our waitress recommended this dish. It was steamed dumplings with spilt pea and tomato sauce. It tasted OK but Aushak sounded more interesting.

This site uses Akismet to reduce spam. Learn how your comment data is processed.