The only reason we ate here was because we spent 2 1/2 hours in traffic coming back from Santa Monica. I was going to pick up some fish at Santa Monica Seafood, but my nieces didn’t want any fish. They didn’t want to eat here either and they said they didn’t see anything on the menu that they liked. They said the same thing about Superba!! Picky eaters. The person that took our order was not helpful at all. I asked her what cut of steak was the steak Cobb and she didn’t know and after going back and fourth three time she said it was made with filet!! Yeah sure!! I mean, come on, train your staff. This are the basic info people like to know. The rest of the staff were helpful and in the case of the surfer dude, even cheerful! 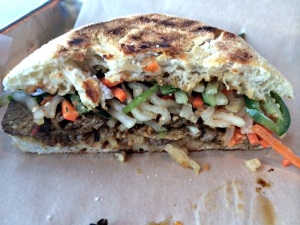 Spicy Lemongrass Steak Banh Mi
lemongrass marinated steak with chili aioli, housemade sweet chili sauce, housemade pickled daikon & carrots, cilantro, jalapenos, cucumbers on panini grilled ciabatta
My husband and brother had this and found it fine. Not as flavorful as they had hoped and the steak was not only poor in quality but also overcooked. 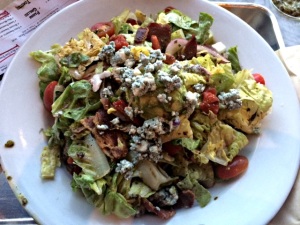 The Blue Cow Steak Cobb
carved steak with Prime applewood bacon, marinated red peppers, avocado, red onions, grape tomatoes, blue cheese crumbles, Scarborough Farm’s butter lettuce & romaine with whole grain mustard vinaigrette
After all the back and fourth with the order girl, this was a very disappointing salad. The so called “Fillet” was overcooked, very small pieces of mystery meat with no flavor whatsoever. To add insult, most of the bacon pieces were overcooked and were as hard as a rock. I took half of my salad home and the next day it was even worse!! 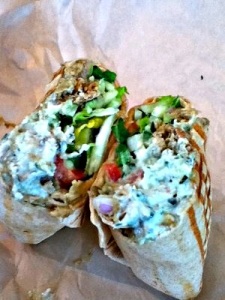 Vegan Shawarma
Mediterranean chickpea shawarma with a bean puree, vegan tzatziki, red onions, cucumbers, tomatoes, shredded romaine on panini grilled vegan whole wheat tortilla wrap
My nieces shared this and they seemed to like it for the most part.

I will not return, unless they have some special salad that does not involve meat.