Bondi Grill is the first venture for Australia’s Hurricane group. They baste their burgers, ribs and steaks with their special sauce and chargrill them.
Their service was polite and informative, but pushy!

This was a gift from the kitchen and although tasty, it was on a salty side. 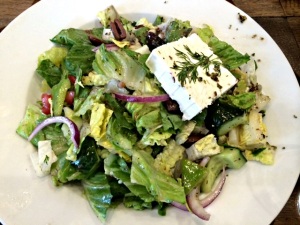 Rustic Greek Salad
A little pricy for a mostly Romaine salad. There were some Chopped Cucumber, Tomato, Bell Pepper, Kalamata olives and Red Onion, but not enough to satisfy your Greek Salad craving. The Feta up top was tasty, but not enough for a large Greek Salad. The dressing needed more acid to give it a burst of flavor.

Sweet Potato Fries
It was fine, but on the soft side. 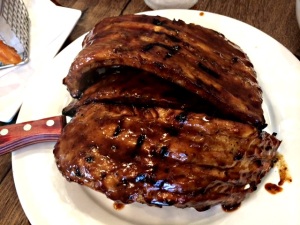 Bondisaurus Pork Ribs
This was their specialty and it was a free range, hormone and antibiotic free pork. We got the half portion for $22.95. At first it looked like a lot of food and a good deal. As we started eating the ribs we noticed there were not much meat on them. The sauce was overly sweet and got old fast. We were planning on trying their steak and burgers later on, but since they baste everything in their magic sauce, the chances are slim.