Connie and Ted’s is chef Michael Cimarusti’s New England clam shack and is named after his grandparents. This restaurant has been on my radar for a long time.  I even made a reservation last year but I canceled. It was mostly because of the uneven reviews. I finally decided to take the plunge and check it out. Service was very friendly and we had a good seat facing the open kitchen. The biggest problem with this restaurant was their very heavy hand in using salt in the dishes we got.  The second problem was some of the dishes were priced high considering the simplicity. 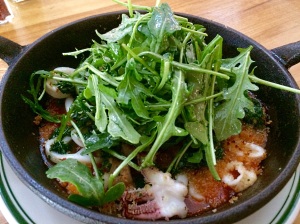 Grilled Calamari San Marzano Tomato, Arugula, Garlic Breadcrumbs
This was a nice start. The calamari was grilled perfectly, but the the garlic breadcrumbs were on the salty side.

Fried Clams with Bellies Tartar Sauce, Onion Rings
I had heard so much about this fried clams and had to order it. Unfortunately the batter was way too salty and that took away from the sweetness of the clams. I am glad we listened to the reviews and went with the onion rings. That was the highlight of this dish. The batter was so light and a joy to eat. 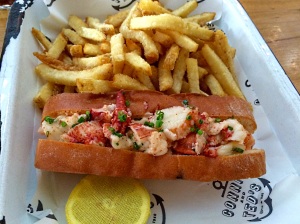 Lobster Roll Hot drawn Butter
I love my lobster roll and this was a pretty good one, but at $26 it was overpriced. To make matters worse, the included fries was beyond salty. Almost inedible. We should have sent it back but decided to take it home and do something with it for the sunday’s brunch.

Well, the only way I could have used the salty fries was to make a fries frittata!!