To say our last experience at Slapfish was underwhelming would be an understatement. We first went to Slapfish original location in Huntington Beach, a few year ago. Last year they opened their Newport Beach location and our two previous visits prior to this one was just fine. This time everything we ordered was beyond bad. Needless to say we will never return.

Clam Chowder Red Potatoes, Clams, Bacon
The fries had a cotton-y, starchy texture. The chowder was fine but nothing to sing about. 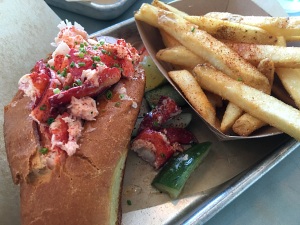 Lobster Roll
As I took my first bite, I was in misery!! Some of the lobster pieces were overcooked and others were passed their prime. I seriously considered returning this mess of a lobster roll, but my husband as usual convinced me to eat this disaster. The bun was not toasted or buttered either. A big disappointment considering how much I love my lobster roll.

Ultimate Fish Taco
Corn Tortilla, Cabbage, Avocado Puree, Pickled Onion
My husband felt the tortilla was too thick and the fish was a little overcooked.

Lobster Roll
It was pretty good, but not as buttery as last time. Also if they warmed up the roll, it would enhance the experience more.

We had been to their first location in Huntington beach years ago and heard about their new location in Newport beach. My brother and cousin were visiting and after a day of snowboarding, they were starving and wanted to try this place. Considering they had only been open for 6 days, the food was spot on and the service was surprisingly friendly. 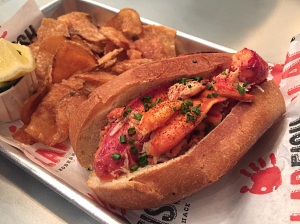 Lobster Roll Hot with Drawn Butter
My cousin and I both opted for the lobster roll. After my recent disappointing experience at the Shuck Oyster Bar, I was glad to eat a good lobster roll. The lobster was cooked perfectly and the roll was the right size. It also came with a side of their crunchy chips. They price their lobster according to the market value. On that day, according to the staff, at $16 it was the lowest they have seen. Let’s hope it stays in that price range for a while. 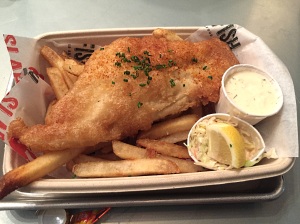 Fish & Chips Flakey White Fish served with Scratch-made Tartar Sauce and Fries
My husband opted for the single fish fry. I took a small bite, the batter was nice and crisp and the fish was moist. He also enjoyed the crispy fries.

Shrimp Burrito
My brother went with the staff’s recommendation and got the shrimp burrito. He said the shrimps were tasty, but as a whole, it had a little too much rice for his liking.