Tuna Poke Toast Avocado, Seaweed, Radish, Grilled Bread
A tasty toast and well worth the $5 price tag. Avocado was a creamy base for the fresh ahi, crunchy strips of seaweed and radish slices. A must order if it is on the menu.

Crispy Pork Trotter & Octopus Hazelnut Romesco Sauce
The pork trotter was good but the octopus was sadly overcooked. The romesco was pretty good. 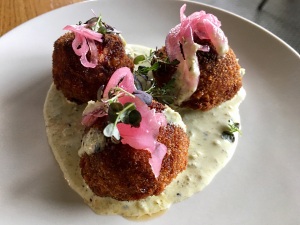 Chorizo and Potato croquettes Jalapeno Lime Aioli
It was a nice tapa but it had more potato than chorizo. The aioli was a nice base.

Tropical Verrine Lychee, Passion Fruit, Coconut, Macadamia Nuts
This was a favorite last time, so we had to get it again. For whatever reason, it did not satisfy as much as the first time. The price had gone up also.

I am always on the lookout for healthy food in Orange County. When I read about Falasophy and the fact that the guy behind it was from Beirut, I decided to give it a try. Overall, what we tried was pretty good, but you are better off getting your fix earlier in the day when their shawarma is fresh. 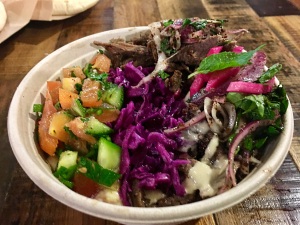 Hummus Bowl with Shawarma Hummus topped with Steak Shawarma, Parsley, Onions, Pickled Turnip, Mint, Tahini
The hummus was better than average but a little more spice, garlic and lemon would have taken it to another level. The beef shawarma was spiced well and tasted good. The veggies were pretty good and were very fresh.

Plato’s Salad Bowl Organic red quinoa salad, Shawarma, falafel topped with avocado, house pickled jalapeños & tahini
I picked this dish the second time we dined here. I asked them to add beef shawarma and skip the hummus. Since it was at the end of the day, the shawarma was dried out. The hipster tabouli with quinoa was pretty good. The avocado added good fat.

Beirut Box Hummus, Lebanese rice, Tomato-Cucumber Salad, Pickles with Chicken
My husband’s pick. he enjoyed the sumac chicken. This was their version of bento box. 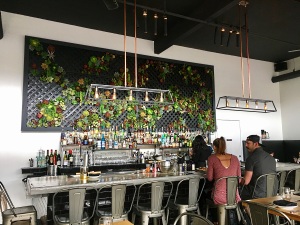 Amuse Pig Trotters
It was a nice bite. Porky goodness.

Local Goat Cheese Toast Seasonal Fruit, Honey, Petite Herbs
We asked our waitress which one of the toasts was her favorite and she picked this one. It was a mild creamy goat cheese with clementines and diced apples on the top of toasted bread. Honey was drizzled lightly.

Steelhead Salmon Benedict Brioche, Fried Egg, Hollandaise, Cherry Tomato
I don’t think we ever had salmon Benedict before. Actually steelhead to be precise. Of course we have had plenty of smoked salmon Benedicts before. Thankfully the fish was not too strong and was cooked right. I was happy to see my favorite lettuce, little gem, on the side.

Tropical Verrine (a modernized twist to classic Halo Halo) Lychee, Passion Fruit, Coconut, Macadamia Nuts
Loved this dessert. I need one for myself next time. I was actually tempted to skip one of the dishes and have both desserts. It was a tropical paradise in your mouth. The passion fruit sorbet was addicting and the macadamia, my favorite nut added crunch.

After our brunch at El Mercado we wisely saved our dessert for the front porch pops. Their pops were way better than the ones from popbar.

Salted Chocolate
My husband’s choice was very creamy and delicious with a hint of salt. 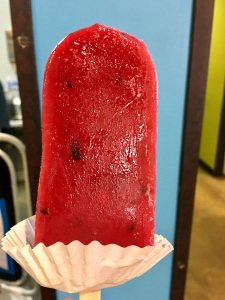 Plum Raspberry Basil
This flavor was right up my alley. Very fruity from the plum and raspberry and aromatic from the basil. It was a little icy though.

When I read that Chef Nate Overstreet, formerly of Wheat & Sons is cooking at the newly opened El Mercado, I had to naturally check it out. The space was large and airy. The service was friendly. 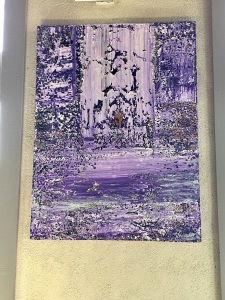 Seafood Cocktail Shrimp, Octopus, Cured Snapper, Cherry Tomato, Cucumber, Avocado
Surprisingly it had a lot of seafood. Some were fresher than others. I enjoyed the snapper and octopus more than the shrimp. The broth was very spicy, so the cucumber and avocado helped to cool and balance the dish. The cherry tomatoes were flavorful.

Steak & Eggs Skirt Steak/Soft Scrambled Eggs/Poyayoes/Epazote/Salsa Puya
I asked the steak to be cooked medium rare and I was told that they only cook it one way. When we got the dish as you can see in the picture, we were disappointed that it was more medium to medium well. The quality of the beef was good though. Considering potatoes are not expensive, they could have given you enough to satisfy you a little more. The salsa puya was pretty good.

We have been to Scoops other locations in Los Angeles many years ago and when I heard they were coming to OC, I was planing to check it out. After our lunch at KTCHN dtsa we walked to Scoops. I was surprised at the flavors they offered. More than half either had honey or caramel or brown sugar. There was no savory or fruity flavors and the samples I tasted were too sweet.

Brown Bread and Maple Coffee
The brown bread was good as usual and the maple coffee was fine, but nothing special.

KTCHN dtsa is located inside the Fourth Street Market in Downtown Santa Ana. The menu is very carb heavy and the only thing that appealed to us was the falafel salad. First off it took them at least 15 minutes to make such a simple dish and then after all the wait we realized they over fried the three tiny falafels. At $9 you would think that they either give you four falafels or more veggies, so you would not feel cheated. 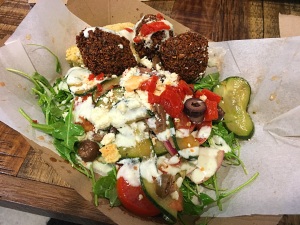 Falafel Salad
The salad was pretty lemony and delicious. It had baby arugula, cucumbers, tomatoes, tzatziki and as I mentioned above, three tiny over fried falafels. I guess they could not manage making proper falafels because they have removed it from their menu.

I have been wanting to try the Little Sparrow for a long time, but the reviews were a mix. When I saw a 30% off for LS on Black Board Eats I was surprised, because I don’t think they ever offered a deal in OC before. Still, I was not sure if it was worth a try, but since the options in OC are not that great, finally gave in and tried the Little Sparrow.
The setup of the place was the most bizarre of any restaurant I have ever been to. There is a very large coffee house in the front and a much smaller restaurant in the back. That is not the bizarre part though. Their kitchen is in the middle of the coffee house and the restaurant, but their pantries were in two different rooms facing the dining room. As we were sitting waiting for our food to arrive, I saw a parade of kitchen staff going back and forth to these rooms and walking away with all kind of produce. It was just unbelievable. Who came up with this insane setup? Service was OK. Our hostess/waitress was not well informed about the menu and made a mistake with our bill. 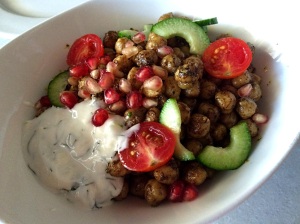 Chickpea Masala pomegranate, Yogurt
It sounded better than it tasted. The masala spice was there, but a little bit of salt would have done wonders for this dish. If you put yogurt and pomegranate as part of the ingredients, don’t skimp on it specially if you are charging $12 for it. 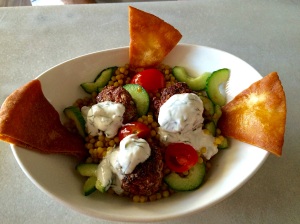 Lamb Merguez Couscous Bowl Harissa, Tzatziki
I encouraged my husband to try this dish and when we asked our waitress how gamey the lamb was, she responded it is gamey. Guess what? It was not gamey at all. He seemed to enjoy his dish. I took a little bite of the meatball and it was flavorful. The pita crisp looked a little greasy though. 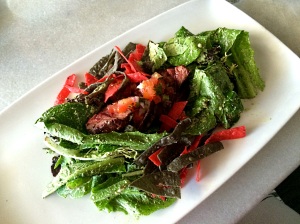 Marinated Hanger Steak Salad Creamy Pepita Dressing, Tortilla Strips
My steak was in a desperate need of seasoning which was a shame considering the good quality of the beef. The salty tortilla strips helped to balance the dish. The dressing on the other hand was a little too spicy.

When we got the bill we were charged for a hanger steak dinner rather than the salad. I felt the value was not there considering the setup and lack of seasoning and I am glad we didn’t pay the full price. Also after our chickpea starter it took a long time for the rest of the food to arrive considering they were not even busy.

Pâté
They gave me a sample of their Pâté and it was pretty good.

Pork Chop
This was a great pork chop with an intense porky flavor.

Merguez Sausage
My car smelled amazing while driving back home from the butcher shop. I was excited to grill this sausages and while they were good, they had a little too much salt for our taste.

Brunch at the The Playground 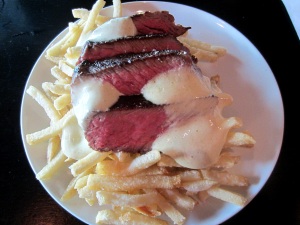 We haven’t been to Playground for a long time and since we have never tried their Sunday’s brunch we gave it a try. We were seated at their communal table. Our server was really pushy and that made me uneasy. My husband is a Hash lover so that was his pick. At $12 the portion was tiny and it had a little meat with some white potatoes and green pepper. I think you could have had a better hash at any diner. Very ordinary and unsatisfying. My Steak was better and it was cooked just right. I just wish they would have added a couple grains of Fleur de sel to the steak to enhance the flavor. The fries was pale and boring. No added garlic, herb or seasoning. It kind of looked like the McDonald’s fries. The odd thing is the Béarnaise was added on the top of the fries. At $26 it should have come with a little green. Since we were seated at their communal table we got to see almost all the brunch dishes and most of them didn’t look that appetizing. Also the noisy people next to us kept looking at us and even took a pick of our bill!! The nerve!! We will not return.