Ancient Rivers is a Middle Eastern/North African restaurant. I heard about their sister restaurant, Busboys and Poets, while the owner, Andy Shallal was talking about it on TV. They have a large menu offering cuisines from Iraq, Morocco, Tunnsia, Lebanan and Egypt. I like that they are not shy about using spices. Even though there were only three tables of diners, the service was a mix bag. Our waiter was distracted and messed up our order. The servers were better. 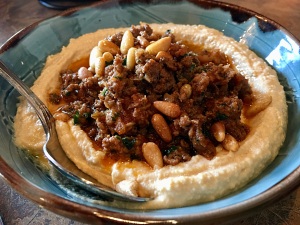 Hummus with Ground Lamb & Pine Nuts
The hummus was lemony and had plenty of cumin. The ground lamb was very good and had lot of flavor from all the spices. 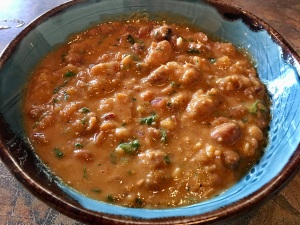 Foole Muddammas warm fava bean with garlic, tomatoes, scallions
Our waiter brought us the hummus Foole Muddammas dish, even though we repeated twice that we wanted the Foole Muddammas. We had to wait a while to inform him of the mistake. Rather than just correcting the problem, he blamed the mistake on the kitchen staff. This dish once again had lots pf spices and tasted great.

Leg of Lamb Kabob saffron rice almonds, raisins, cucumber salad, grilled tomato
Even though I avoid white rice, I liked the addition of the spices and almonds. The side of the tomato and cucumber salad was good even though the tomatoes were pale. The lamb kabob unfortunately was overcooked, as it is the case with most kabobs. It had a good seasoning though.