Kinship restaurant is always among the top D.C. restaurant list. I picked this place to celebrate my birthday. I was nervous a few days before asking myself if I have picked the right restaurant? I guess my sixth sense was telling me something. I found the food in general good but not memorable enough to leave an impression specially with my picky husband. The service was a mix bag. Our waitress had ADD, she did not listen to me carefully and as a result, it left a sour taste in my mouth. When I asked whether I should order one dish or the other, she wrote both of them down!! We had a long gap between our two first dishes and the rest. Our waitress, after what seemed to take forever, came and asked us the confusing question of “Do you want something from the dinner menu”? What? The funny thing was, this restaurant was supposed to have a very polished service. Well, that was not the case with our experience.

Bread
It was a good hearty bread but was offered only once even though we had a long period between our dishes.

Compressed Summer Melon Salad Maryland Blue Crab, Lime Madeline
It was a light refreshing salad but a little more crab would have helped to balance the dish. 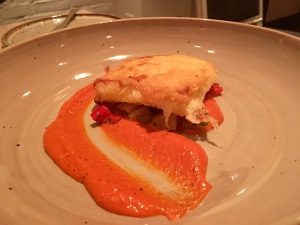 Saganaki Crispy kasserie cheese, sweet peppers, fava beans, rouille
I enjoyed this flavorful dish. But once again, a few more fava beans would have been nice. 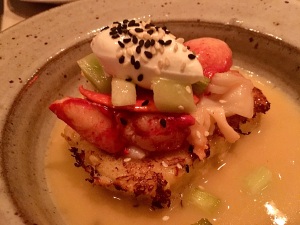 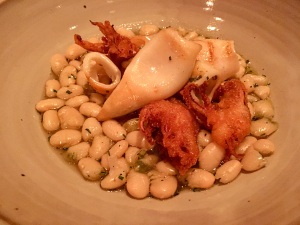 Squid Aglio E Olio with chive blossoms, white beans, espelette and rosemary
This was the most boring dish of the night. It needed citrus or spice to perk it up.

Crispy Braised Lamb Shoulder Confit onion puree, garlic chive, olives and baby romaine
The lamb was cooked perfectly but the side of the braised romaine was not enough to give this dish a heft.

Complimentary dessert for my birthday. It tasted fine and was a nice gesture but since it arrived with the wrong dessert, it lost its purpose to make you feel special.

Kinship Granachan raspberries, whiskey cream, Scottish shortbread and toasted oat ice cream
After looking at the dessert menu, I asked our waitress whether the chocolate dessert was a milk or a dark? when she said milk, I said no, we have the Kinship Granachan instead. After that conversation, what we got was the chocolate dessert! I told the server that we did not order this dessert. He said, he will check with our waitress. She came after a few minutes saying, “enjoy your dessert”! I told her we had received the wrong dessert and explained to her about our conversation. She said oh, I did not hear that!! Really lady, this sure is a very nice way of ruining my birthday because you did not pay attention to what I was telling you.
After all that when we finally got the right dessert, it did not impress. Too much cream and not enough raspberry.