I have been wanting to try Anafre for a while now but kind of did not like the lazy practice of rice and beans included in most of the dishes. I was hoping for some creativity but finally after seeing the restaurant being mentioned in various articles, I decided to bite the bullet and try the restaurant. The food was good and spicy. Service did not match the food. Delay in taking the order and clearing the plates. 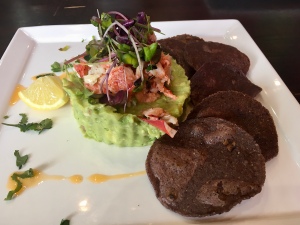 Guacamole Del Mar lobster, crab meat, serrano peppers, cilantro, fresh lemon juice, EVOO
The guacamole tasted similar to the one I make myself. It had a fair amount of lobster and crab. The crisped blue corn tortillas were good but we needed two more to finish up the guac. 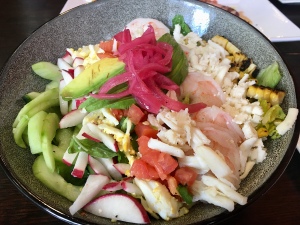 Pulpo à la Parrilla chipotle sauce, rice, beans, grilled asparagus, pico de gallo
The octopus was cooked almost perfect. It had a nice char on the cut side and the thinner area but could have used a bit more char on the skin side. We did not get any beans.